Players who enjoy PvP and events that used to occur much more often on pathofexile.com/seasons might find themselves a bit ‘wanting,’ these days…
WraeClub wants to give players a bit of control, over these game-modes, the best it can; by allowing players to create custom events for these pvp and event-related game modes.

PvP has in-game, pvp events, in which players can join, 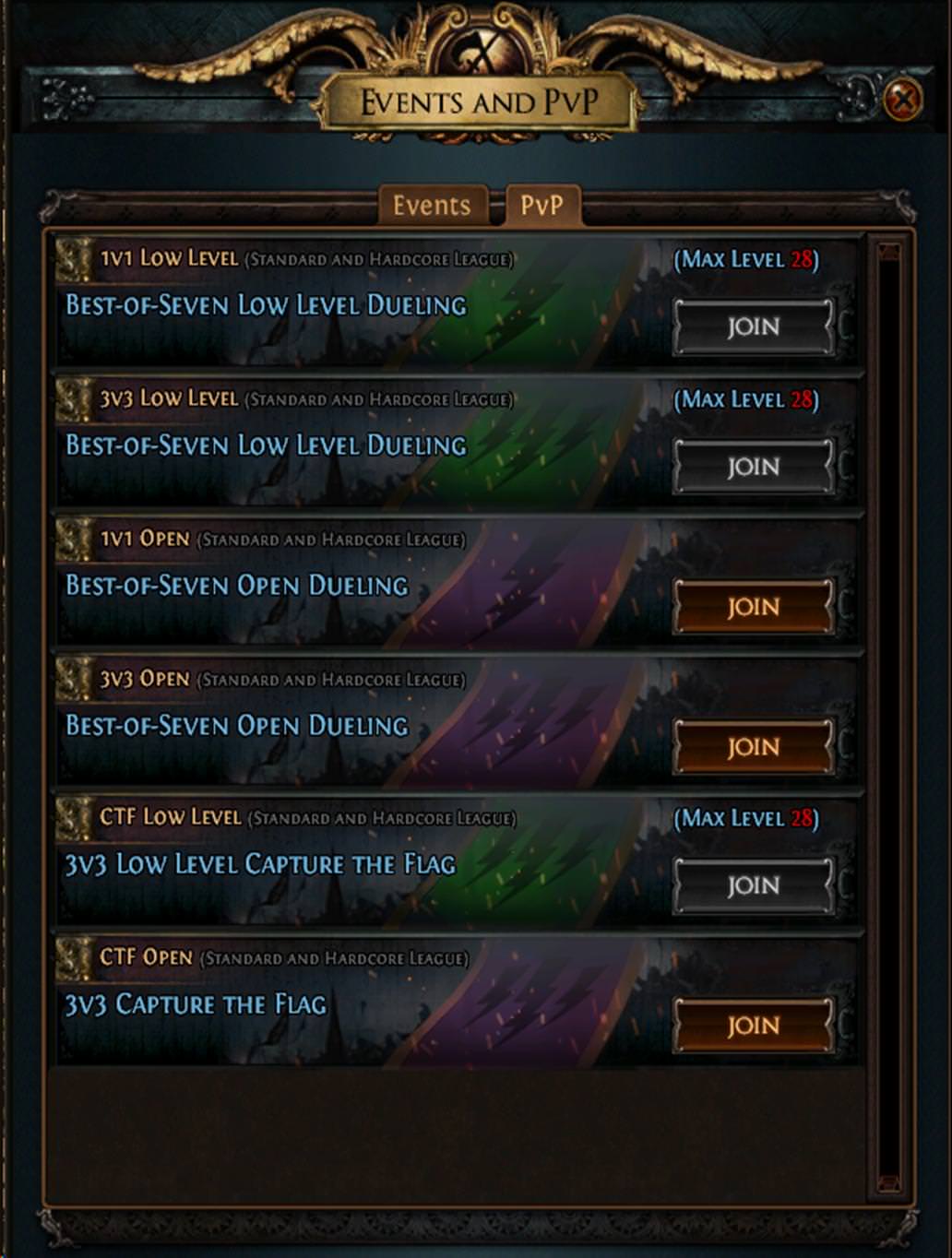 What WraeClub is able to offer in this in-game context is a bit limited, since it can not create instances in-game, which allow for full-functionality (such as capture the flag). However, creating a listing seeking to organize groups of players to go in-game and JOIN the capture the flag event (or another, shown in the image above)… WraeClub can be of some use, there!
Also, since players can create listings on WraeClub of pretty much whatever they want, WraeClub can perhaps help fill in some blanks and facilitate some pvp-action, wherever needed, appropriate, and possible. Use the listing capabilities here, to whatever extent that they can better entertain your pvp-oriented game play!

Here is a portal of sorts, to basically all the pvp-related info for poe (dig through info/links as much as you’d like).

As for the non-pvp events, the in-game event noticeboard simply displays whatever events are available in the character selection screen (if any). 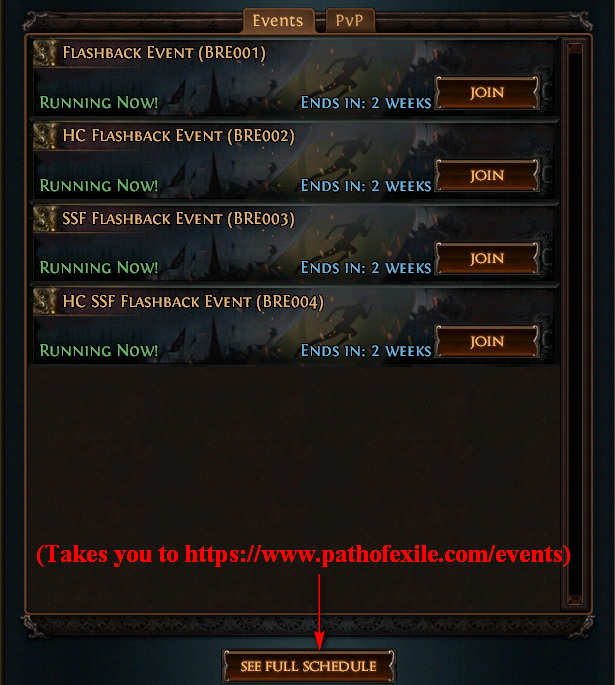 You’ll notice in this image that the ‘see full schedule’ button takes players to https://www.pathofexile.com/events.


At the time the event noticeboard image, above, was taken
that page looks like this: 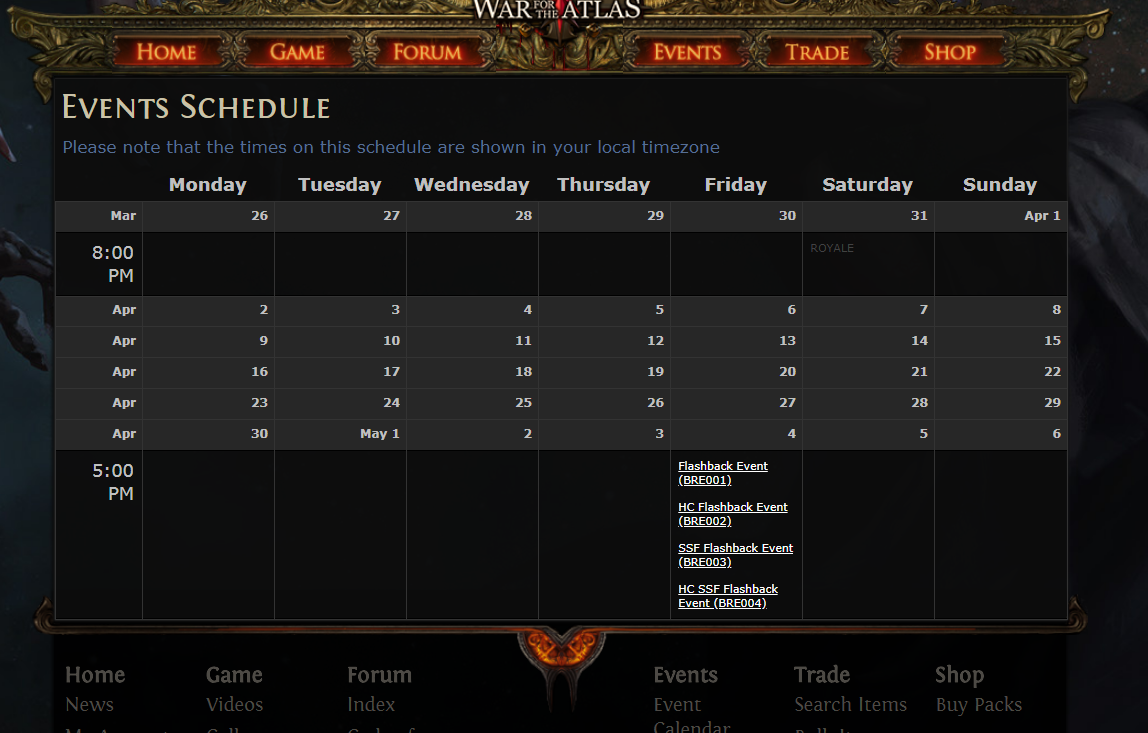 These events differ, however, from those which used to occur at “/seasons”, where frequent mini-races occur often several times per day. Based on the player’s accomplishments in each little race, points can be earned and accrued, in order to win various prizes offered by GGG.

Rather than explain in more detail, you can see GGG-provided information, here, instead 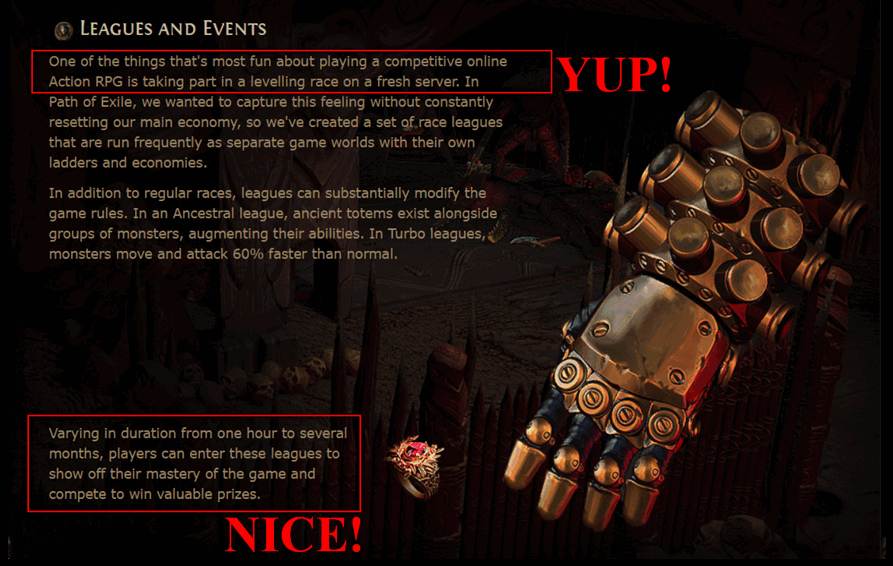 The issue is: What happened to these kinds of events?. From what we can tell, GGG has abandoned the creation of such events (at least, for now).

As with pvp events, WraeClub can’t implement things in-game, such as various mods you might find mentioned in races, here, (such as ‘BLAMT’ for example). However – since players can create listings to compete against others, however they see fit – certain generic race formats can be mimicked (eg. merveil/dominus/brutus/etc-kills); and prizes for the winners can be whatever the players decide!

Since the events for the WraeClub listings have no restrictions – in terms of the event itself, the rules, OR the prizes – why mimic anything at all… Well, you dont have to – these parameters can be completely made up. They can be subjective, and to the players’ creativity and imagination; which brings us to the REAL point of interest, in which WraeClub CAN be of service: Arbitrary Events.

We don’t necessarily have to wait on GGG to host events, in order to have some competitive, “racing” fun… The community is capable of creating its OWN events. For a short while, there was a group of various, relatively ‘famous’ streamers, who realized this fact and took racing into their own hands. You can check some of it out, here and here for instance. Some other ideas suggested in an old forum thread can be referenced, for some inspiration. Perhaps you like where this guy’s head was at.

They essentially created and scheduled their own ‘arbitrary events’ in which the races’ objectives, rules, etc. were laid out, by THEM! They didn’t ‘need’ in-game features, such as those within events such as the “BLAMT” one mentioned above, in order to have some competitive fun. If something like this interests you, perhaps organize this even using wraeclub’s features.

This site is fan-made and not affiliated with Grinding Gear Games in any way.